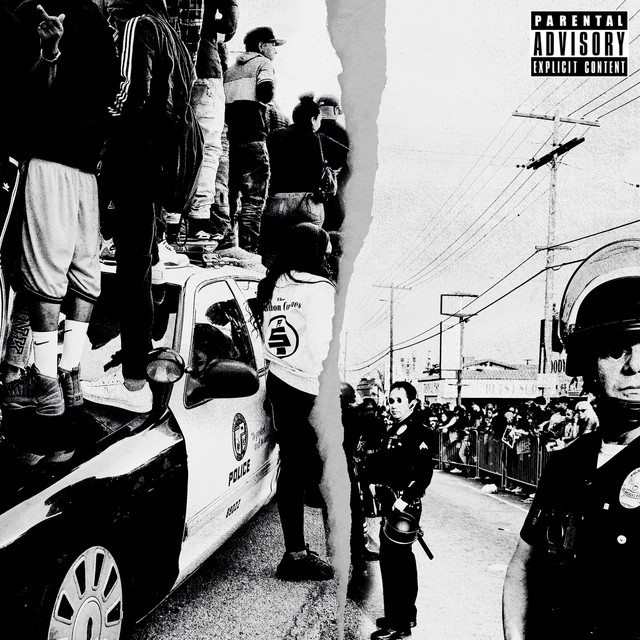 by Terrace Martin with: Denzel Curry

Verse 1: Denzel Curry
Helicopters over my balcony
If the police can't harass, they wanna smoke every ounce of me
Breath is alchemy, see how the life converted
You tell me life's a female dog, well I'm perverted
Go to jail and get murdered
Murder was the case they gave us
Manipulate the system so the prison could save us, ayy
Nothin' can save us
Foot Locker, liquor stores, undercovers bringin' hordes
Ten years plus four, little kids die at war
Mama wants me baptized, swimmin' in this blood shore
Shut down schools to open drugs and gun stores
I see the floor, gotta flourish
When I'm readin' my horoscope, the vision is horrid
But you be soarin', stay woke
Rather die rich than stay broke
I was starin' though my rearview in my pitch-black locs
My notes reappear, disappear, shit is wicked here
Tragedy all over the screen like William Shakespeare plays
Disease, the grade, increase grenades
Disease, the AIDS, I seize today
Like Wade, I fade away
I pray today, 'cause life is crazy
JAY-Z, a school for hard knocks
They want us crucified with stones and hard rocks

Interlude: G Perico, Britney Thomas & Daylyt
Ayy, bitch, calm down, what the fuck happened? (Oh no)
Stop fuckin' screamin', what happened? (Oh God, they shot him)
They killed the homie? (They shot him, the fuckin' police shot him)
The police? (Oh my God)
The police killed him? (Oh no, no)
They just killed the homie, cuz (Oh my God)
Ayy, cuz, swing that car around, cuz, bring that chopper (The fucking police)
We finna kill these motherfuckers, nigga (Uh)

Verse 2: Daylyt
See, all we are VR'd, sleep in a snooze
Peeking at deacons keepin' the rules
Creepin' in rooms
Sheet sneakin' cheeks for the doom, cats kiddin' me
Little cats killed literally
How these cats talk bigotry?
Like an Avatar forest, the machine talk, Jarvis
Whatever they hand you, it'll be y'all risk
Your hand stuck in the cookie jar, hold on to the sweet shit, beef shit
Green jackets, the old cats, feel the heat cliff, eclipse
Blacks cover the white light, cats stuck in the twilight
Why, Lyt? See, the wise life stuck in hindsight
Sign bright, read, catch up, it's monumental, don't mind your men
Mind you, what's in my mind intertwined you, men sign you in
Don't get no autograph from Patrick
Just collapsed shit
But don't run from Cleopatra
Perhaps you sleep and your mattress weak
Stuck like a statue, is that you geeks?
We attack you, don't act too street
We gon' ask you is this a cop-out?
Bring the cops out, bring the pigs
You see the pigment
We depict, the indigenous people dig it
Hold on to life, we don't go for the house of reps
They done trapped us in the alphabet
Our alphas can't get out the net
'Net ballin', imaginary goal
Shot clock, what's your net worth?
Chris Webber? Mmm, deep webber? Mmm
Time out, mom's house, etymology, mortgage die route
Be lesbian, buddy, you better study
Puddy holes on this muddy road
Buddy cold
They gon' pay for takin' my brother
Nas say we need one mic and they shot the brown one
Y’all done forgot the brown one
The new white Mike
Rockin' a nightgown
It's ancient
They covered his passed with his kid blanket
Y'all sleep, y'all don't see how the image changed
'Member the times, nigga
I'm here to remind niggas we kings

“Pig Feet” is a protest track from Terrace Martin featuring vocals from Daylyt and Denzel Curry detailing large amounts of systemic injustice that has been brought on Black Americans by systemic racism in all facets of the country’s society. The two touch on the issue of police brutality as the song was released during the midst of the George Floyd Protests in America.

The title plays on the term “pig,” used to derogatorily describe police officers.

The track was first announced by Denzel Curry on June 1, 2020, revealing the four other collaborators on the track and the cover art of the song. Martin later posted a private link to the song’s SoundCloud listing in his Instagram bio.