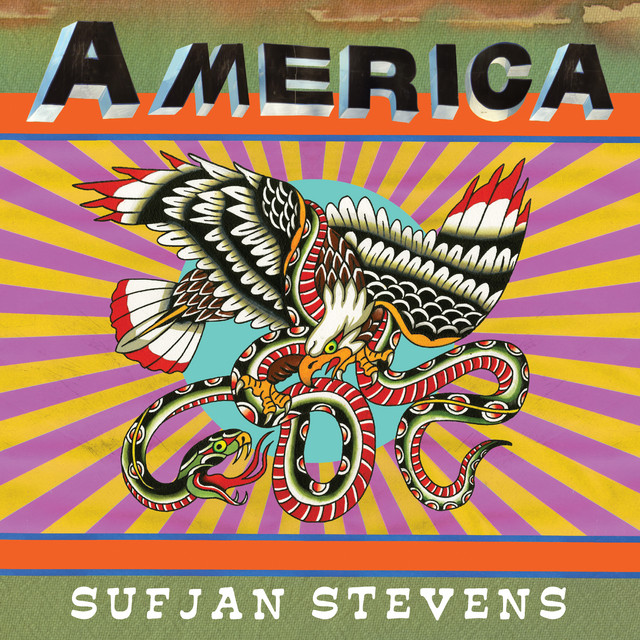 Lyrics for America by Sufjan Stevens:

I have worshipped, I have cried
I have put my hands in the wounds on your side
I have tasted of your blood
I have choked on the waters, I abated the flood
I am broken, I am beat
But I will find my way like a Judas in heat
I am fortune, I am free
I’m like a fever of light in the land of opportunity

“America” is the first single from Sufjan Steven’s forthcoming album, The Ascension. The track was first announced (alongside the album announcement) on June 29th, and was released on July 3rd, 2020– notably only one day before July 4th, which is Independence Day in the United States.

The single will also be released as a limited edition 12" 45rpm. “America” is his first release since his joint album with Lowell Brahms in March, and his first solo release since 2019’s Love Yourself / With My Whole Heart EP.

According to Asthmatic Kitty’s press release, “America” was first written in 2014, along with its B-side “My Rajneesh”, during the making of Stevens’s previous solo album, Carrie & Lowell, but shelved and put aside until a few years later. America formed the foundations of what would become the rest of The Ascension.

The timing of its release, at a time when America is experiencing both the COVID-19 pandemic and intense Black Lives Matter protests across the country, lends some context to the song’s themes, even if it was not written with the moment in mind. Stevens envisions “America” as “a protest song against the sickness of American culture in particular.” Stevens has also voiced support for the Black Lives Matter movement on his Tumblr.

Although much of Stevens’s older music, especially the infamous Fifty States Project, fondly entwine themselves in American culture and history, “America” is hardly the first Sufjan Stevens song to criticize aspects of American culture. On “Christmas Unicorn”, Stevens sings:

“The Hidden River of my Life” also evokes similar images of American consumerism, referring to being a “Safeway shopper,” “Subaru driver,” and “Nike racer.” Even “Exploding Whale” could be said to have a similar tone to “America,” using a local government’s ineptitude at removing a sperm whale from the beach as a metaphor to speak about a greater cultural failure.