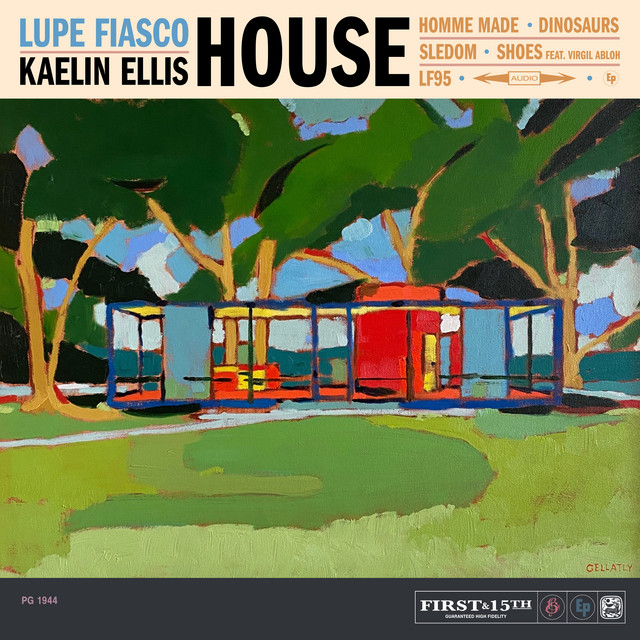 by Lupe Fiasco with: Kaelin Ellis

Verse 1: Lupe Fiasco
Uh, yeah, uh
Been standing in line since Thursday
I heard a rumor they might be dropping them early
Should have 'em just in time for your birthday, irrelevant holiday affair
Got one of those three-leg folding chairs
I am what you call prepared for the campout
Evening brings the battery-powered lamps out
Warm clothes but blanket 'case it get cold
Corn chips and basic staples to hold
Hunger over 'til Uber Eats is ordered
Maybe pizza or quesadillas and sopa
Got a little cooler with assorted waters and sodas
Cinnamon sugar-coated malassada, the odor
Makes me the envy of the line
If not the enemy, not my energy, I'll be spending plenty of time
Inside the books that I bought
Got audios and regulars, quite the party goer and reveler
Uh-huh, uh-huh

Interlude: Virgil Abloh
So, on today's to-do list is to design a pair of running shoes
The goal is as always in my work is to add emotion to inanimate objects, so

Verse 2: Lupe Fiasco
Uh, release day is finally upon us
More celebratory than the former
But mixed with bittersweet vibes most certainly switched to different beats
More policed than Justinian's Byzantinian Christian beliefs
There's a risen rhythm you can feel it all in the streets
Like a marathon or a parade
Poets might wanna pull they pens out like grenades
Or, or that model for a year and a half
And write down all the tears and the laughs
A shot across the bow of the tyrannous class
Quote from man standing on float
The whole event is just biggest-fan-channeling dope
I mean, one just feels privileged and esteemed
Inwardly serene and spiritually clean
Even the line feels like a team
In stark opposition to a competition for things

Interlude: Virgil Abloh
With that, these shoes that we are about to design with words
Starts with a sole
Not a sole, but soul, you know, what touches you to earth
That's floating in nowhere, the soul

Verse 3: Lupe Fiasco
Yeah, uh
With touching signs of equality to match
White kid at the front let me go first cause I was black
Said it was only right
He was used to having head starts his entire life
Maybe it was time to step aside like trilobites
Touching, I never forget it like riding bikes
The ordeal starts to spring feelings like guiding light
Permanent villains go about chilling they psychic fights
Nice, and to a buyer's delight
You're limited to two so that means I'm buying them twice
One pair to wear, one pair on ice
Aftermarket speculation will surely hike up the price
Call that all in the plans
Feeling like Mike with the ball in my hands
Swear to God, it's like the best game he ever played
I get to wear the first pair possibly ever made

Verse 4: Lupe Fiasco
Uh, yeah
I get applause as I step outside the pop-up
The shop resembles the unfinished house he was in before they shot us
We fell down, then we got up
Picked Pac up, picked Nip up
This is the type of tripping that scuff kicks up
Traditionally creases was a style to refuse
But now they represent every mile in your shoes
Any mud on your sole gets toweled and removed
It's like I'm retracing every trial, know it took strength
Giant steps flowers growing out of the footprints
Liberation, here's your invitation
It's a relay race, continuation
Get the baton and keep bringing it back
That string theory means we'll keep being attached
Last thing, this is something of a sight
Even when you take 'em off, they keep running for your life

Outro: Virgil Abloh
You know, can withstand multiple beatings by the ground
But it's tough enough to continue on, that's the sole
Now there's an upper on top of that sole
The upper is made of leather
Or maybe knit or maybe both, you know?
That sole and that upper combined by stitches
Leaves for a dynamic enclosure around the foot
There's a tongue, there's even shoelaces
You know, those shoelaces, they are literally as elastic as a rubber band
But as tough as links of steel, let's call it chain links
So, here we have the shoe taking shape
There's a logo on the side, fill in the blank with your favorite one
They're all man-made, it's all good
But this shoe, these Air Ahmauds or these Air Arberys
Are starting to take shape now, you know?
They connect man and earth, they allow you to run
That running is freedom, accelerated heart rate by design through design
Air Ahmaud, Air Arbery
What color are these shoes? The upper of these shoes
Maybe white, maybe black, pick your favorite
But, you know, the world's black and white anyways
So might as well limit the whole color palette to that
Signed, Virgil Abloh, in quotes of course
Oh yeah, there's a red zip-tie on this thing, it makes it our own
It's tied into a history of art that's now
Copyright 2020

“SHOES” was recorded as an ode to Ahmaud Arbery, a black man who was murdered while running through his neighborhood. Lupe plays on the theme of running throughout this song with the help of Virgil Abloh, the first black artistic director for Louis Vuitton.

Lupe personifies himself as Ahmaud Arbery waiting in line for a release of the running shoes in which he would eventually be murdered.