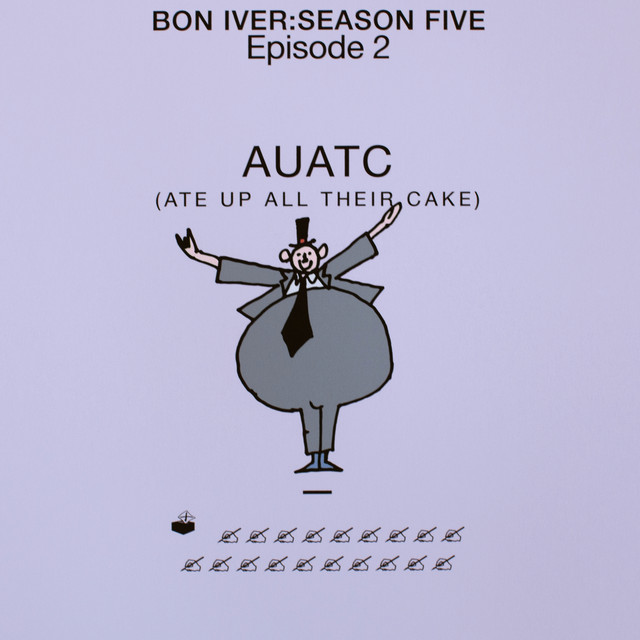 Lyrics for AUATC by Bon Iver:

Verse 1
Well, you're up all night
And your head's down low
If you can see your own kite (Shed a little light on it. No?)
You know a burden ain't a bust
You are the only way to trust ya
No no no
Only a better pauper ?

Chorus
Lay down, Martha
Lay down the holy banner flag
Hold out, Martha
Help is surely on its way
And it's not right
Don't bask in the glory of mine
But oh no, they cannot take that part away

Verse 2
Ate up all their cake
And they drank their own wine
They were always on the take (Will you shed a little light on it)
Well, you know the burden ain't a gust
The only path to love is touch
I know that all that ain't probably amount to much

Chorus
Lay down, Martha
Lay all that alabaster down
There's no master and
Help will surely come around
I don't ask
I don't bask in the glory
Oh no
And it's up to me if I don't wear a mask

The new Bon Iver track “AUATC” – an acronym for “Ate Up All Their Cake” – was released on 5 August 2020 and is characterized by a surprising vocal blend featuring appearances of Bruce Springsteen, Jenny Lewis, Jenn Wasner and Elsa Jensen, in addition to Justin Vernon’s own.

According to a statement by the band, the cryptic lyrics relate to the disparities, marginalization and oppression caused by capitalism and how the global pandemic has magnified these issues.

The cover art of the track teases it as “Bon Iver: Season Five – Episode 2” (PDLIF having been labeled the first episode). The fourth Bon Iver album – i,i – had been dubbed the fourth (and possibly final) season in their album cycle. However, the listing of the two new tracks as episodes of a fifth season seems to confirm that a fifth album is in the works.

The track has a very specific length of 2 minutes and 22 seconds – 2:22. Considering Justin Vernon’s knack for numerology – specifically Justin’s personal connections to the number 22, which came to the foreground in many aspects of the album 22, A Million – this is unlikely to be a coincidence. In numerology, the number ‘222’ is often connected to new beginnings and new creation. This fits in neatly with the teasing of a new album and “season”, of which this would be the second episode (the number ‘2’ – once again). Another meaning connected to the number ‘222’ is that of cooperation and being in harmony with yourself and others around you. Considering Bon Iver’s increased focus on collaborations – both within the PEOPLE collective as outside of it – and Justin’s continued personal search, this connection rings true as well.