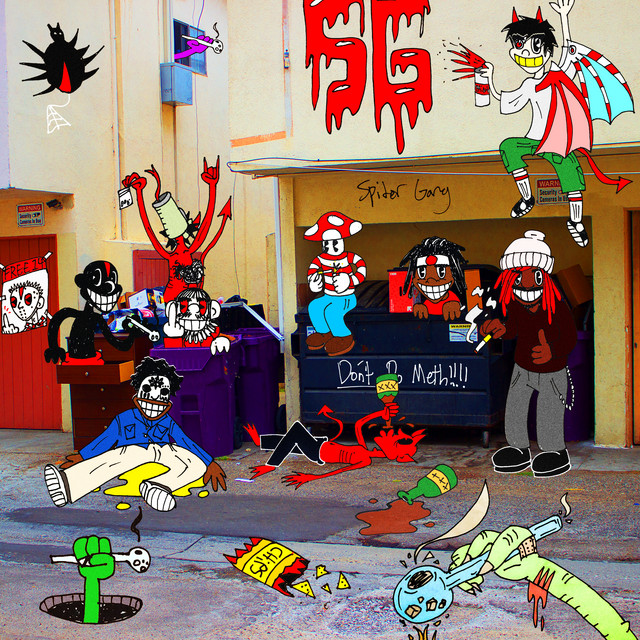 Intro: Afourteen, BRUHMANEGOD & Eric North
Hello, my name is Afourteen and I was not here for the first half of the recording of this song
But, I'm just here to say, that, meth is bad kids
And you should not be doing that 'cause it will hurt you very bad
Oh, brother, this guy stinks
Ayy, yuh (Yuh)
Ayy, ayy

Verse 3: STONEMAN & WENDIGO
I'm in madhouse, ten-down, take the trash out
Stand down, you ain't got eyes, pull the strands out
Walkin' whack, in the alley smokin' smack, still in shacks, shit
Back to back to back to back, I dragged it
Heavy breathin' down ya' neck, it's Mr. Reaper (Mr. Reaper)
Walk up super sneaky, spin ‘em like a CD
Drivin' in a car that I'll be leavin' (I be- I be-)
Man, I'm tweakin' (Yeah-yeah)
I'm drowsy, fuck, I'm tryin' super hard to focus
In the walls, rats, rats and fuckin' locusts, hah

Verse 4: BLCKK
I'ma fuck up yo' whole face, put you in a rat race
Shove you in a bathtub and kick a fucking toaster in it
I'on like you or your friends, lil' bitch
I can smell that shit from miles, you a snitch
I'ma make ya' fucking body start twitching
I'm tryna cut you open, motherfucka, stop flinchin'
And if I had to choose between fuckin' with you and dyin'
I'm tying up a knot around my neck and straight divin'
Fuck my life, I'ma hang my wife
I'ma tell the fucking cops the stupid bitch was suicidal
Kill yourself, you a goddamn clown
I'ma force feed ya' cyanide and put you on a unicycle

Verse 5: BRUHMANEGOD & Royalty the Kidd
Meatman, I'm the muthafuckin' meatman (Okay, okay)
Careful where you creep, man (Okay)
I will fuckin' eat, man (Okay)
I will brew a soup (Yeah)
I am from Peru (Yeah)
Start a war between the continents
Rocket full of pocket lint
Lackin' human common sense (Ayy, ayy)
I don't tote poles, I jus' toke bowls (Ayy, ayy, ayy)
Smoking with some moles you know
I'd never rhyme that shit with chokehold
I feel like a crackhead, every day
Bam, Spider Gang, and we want a plot of land (Yes)
You no Spider, you's a fly so you get banned (Banned)
Walk around with my hand in my pants (In my pants)
Understand you are not from the strand (Fuck, shit)
So you fucked up, hug the spider truck (Yeah, yeah, yeah)
Wanna ride when we drive by cause we tight as fuck
In the trunk and we finna hit numerous speed bumps
Runner-ups get run over but only the knees crush

Verse 6: Lil Darkie
Yuh, yuh, I have an erection, I have no direction
Slipping on a liquid, non-addictive, like its borin'
But it's not it got me soarin', I'm trippin' into my core
And I'm waiting patiently, fade into sofa gracefully
Maple leaf, thinking 'bout when the paper leave
How am I gonna pay for weed? (Ugh, fuck)
Kick it like it's Liu Kang or Ip Man
I just wanna stick the tip in
It do hang like a Nike from a shoestring
I'm creepin', doing acid is my new thing
It seep into my brain and it do sting
Like electricity, he pissing me off
He going missing like decision to be soft like a kitten
I'm spitting niggas into submission
And written 'em out of existence
Like Light Yagami, dark sodomy
She like a meatman, bitch, I'm a butcher I cut off yo' leg
Turn you into a seat man, I'll make a feet fan
"Decrease your prices," I'll increase my vices
Mixed herbs and spices inside of my eyelids

A bunch of methheads going hard. not much else to say. mix of trap metal, freestyle, screamo and rap.