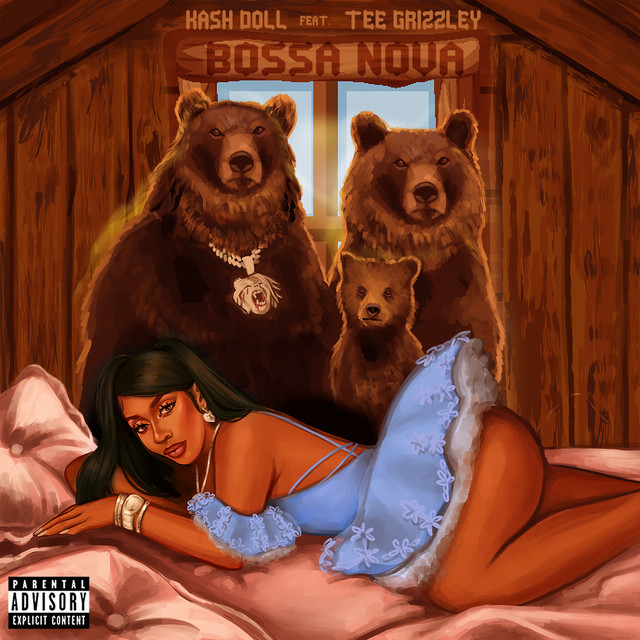 Chorus: Tee Grizzley
Let me call some bitches that for sure goin' (I ain't goin')
Pull up on us, 3AM like Bossa Nova, bro (They comin')
Ayy, go and get a bottle from the corner store (Like ten)
If I was you, I wouldn't fuck without no Trojan on (Wrap it up)
I just picked a nigga crib in the Louis store (I'm eatin')
She talking 'bout what she gon' do, and she gon' do it, though (She gon' do it)
All the rooms sold out, pull up to the O (The studio)
You ain't gotta drive, I'm 'bout to send this Uber, ho (The car outside)

Verse 1: Kash Doll
Man, nigga, what the fuck I look like hoppin' out a Uber?
Nigga better send thе chauffeur with some fur and some jеwelry (Yeah)
Only God can judge me, fuck the 12 and the jury (Yeah)
Nigga get from 'round me if you ain't hung like a jury (Ayy)
Why you worried 'bout a condom, nigga, where your account? (Where your account?)
I'ma need a check 'fore I come here like a boss (Bling)
Chanel bag, bitch, you got a lisp, you can't pronounce it (Hahaha)
Balenciaga habits, damn, I need to see a counselor (Ha)
Baguettes in my bracelet will give a bitch a facelift (Bitch)
Never trust a nigga that don't look right in gray sweats
Like, why you pull it out if you ain't gon spend it, though? (What you pull it out for?)
Nigga said he put it in but I ain't feel it, though

Chorus: Kash Doll & Tee Grizzley
Let me call some niggas that for sure will go (Ayy, yeah, just call him)
Pull up on us, 3 AM like Bossa Nova, ho (We 'bout to slide, come on)
Ayy, fuck a bottle, nigga, bring the corner store (They want some bottles, ayy)
If I was you, I wouldn't fuck, I'd fuck with his bro (Hey, they on that, bro)
I just picked a bitch vehicle in the Gucci store (They got money too)
He talkin' 'bout how he be spendin', but is he gon' spend it, though? (I'm spendin', he cap)
Bought the rooms all out, each and every floor (All of 'em, rich)
Sign this NDA (Ayy) or you can catch an Uber, ho (Non-disclosure, haha, fuck outta here)

Verse 2: Tee Grizzley
Ayy, I don't even call them hoes, I'm just talkin' shit (Talkin' shit)
I be real respectful, all the way up until I hit (Then it's over)
I go from, "Baby, I miss you" to, "Come and eat this dick"
It ain't like I'm askin' you to do somethin' you ain't never did
Ayy, do y'all smoke? What y'all drinkin'? What y'all chasin'? (What y'all chasin'?)
How your friends look? Them hoes better not be basic (They better not)
If y'all ain't fuckin', don't pull up, we ain't gon' make it (Just stay home)
Don't ask me what that mean, that mean pull up and get naked (Ayy, ayy)
I'm with five niggas (You know who the fuck I'm with, man)
Ayy, so bring ten bitches (Where the hoes at? I know you got 'em)
'Cause I know three ugly (I know all them hoes ain't cold)
And at least two ain't gon' be with it (They better not)

Verse 3: Kash Doll
Real gutter bitch, got my body and my mind right
I can't see the opps 'less I'm lookin' back in hindsight
I'm in a Royce, and the bitch ain't even 5'9" (Royce)
You won't even hate me, you a fan, you need pom-poms
Sittin' courtside, never been the sideline
How you the connect, you ain't even got WiFi?
How y'all sharin' hoes when y'all sharin' clothes (That's right)
How you ridin' for your niggas but your L's is spinnin'? (Hahaha)
I can raise you boys 'bout this pape', you my grandson (Hey)
I just dropped cash at Chanel like a ransom (Cash)
I need mine and some, Birdman hand rub
Oh, I thought a nigga with air in his Magnum just said somethin'

Chorus: Kash Doll
Let me call some niggas that for sure will go (They goin')
Pull up on us, 3AM like Bossa Nova, ho (I ain't goin')
Ayy, fuck a bottle, nigga, bring the corner store (Some Ace)
If I was you, I wouldn't fuck, I'd fuck with his bro (Bro)
I just picked a bitch vehicle in the Gucci store (I got it)
He talkin' 'bout how he be spendin', but is he gon' spend it, though? (He cap)
Bought the rooms all out, each and every floor (The Ritz)
Sign this NDA or you can catch an Uber, ho (Fuck outta here)

Outro: Kash Doll & Tee Grizzley
Like, bitch, how is you bussdown? I know somethin'
The same way you the plug, and you owe somethin'