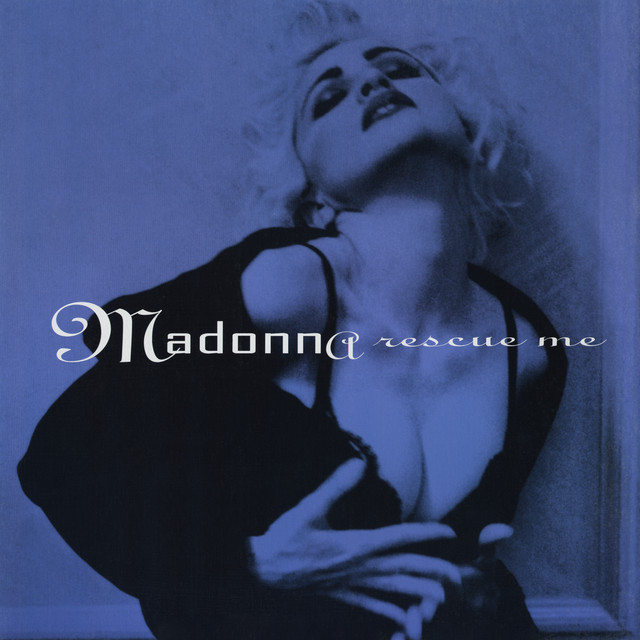 Lyrics for Rescue Me by Madonna:

Verse 1
With you I'm not a little girl, with you I'm not a man
When all the hurt inside of me comes out, you understand
You see that I'm ferocious, you see that I am weak
You see that I am silly, and pretentious, and a freak
But I don't feel too strange for you
Don't know exactly what you do
I think when love is pure you try
To understand the reasons why
And I prefer this mystery
It cancels out my misery
And gives me hope that there could be
A person that loves me

Verse 2
With you I'm not a fascist, can't play you like a toy
And when I need to dominate, you're not my little boy
You see that I am hungry for a life of understanding
And you forgive my angry little heart when she's demanding
You bring me to my knees while I'm scratching out the eyes
Of a world I want to conquer, and deliver, and despise
And right while I am kneeling there
I suddenly begin to care
And understand that there could be
A person that loves me

Post-Chorus
Love is understanding
Its hard to believe life can be so demanding
I'm sending out an s.o.s
Stop me from drowning baby I'll do the rest

Post-Chorus
Love is understanding
It's hard to believe life can be so demanding
I'm sending out an s.o.s
Rescue me, rescue me

“Rescue Me” is a song by American singer and songwriter Madonna from her first greatest hits compilation The Immaculate Collection (1990).
It was written by Madonna and Shep Pettibone, who also worked with her on the worldwide chart-topping single “Vogue” (1990) as well as her fifth studio album Erotica (1992).

Sire Records released “Rescue Me” as the second single on February 26, 1991, and as the third single on April 7 in the United Kingdom. It peaked in the top-five in countries in Ireland, the UK, Italy, and South Africa, and at number nine on the US Billboard Hot 100.

“Rescue Me” is an upbeat dance-pop and house track; its composition is similar to that of “Vogue” (1990). According to sheet music published at Musicnotes.com at Alfred Publishing, the song is composed in the key of D-flat major, with Madonna’s vocals ranging from B♭3 to E♭5.

It is set in the time signature of common time and has a tempo of 116 beats per minute. Lyrically, “Rescue Me” expresses the comfort of being one’s self in a relationship and the calming of one’s deranged behaviour in the presence of the other.

The song opens with a heartbeat and thunder, followed by a prominent bass line, a piano, snaps, and percussion. Madonna begins singing “I’m talking/I believe in the power of love/I’m singing/ I believe that you can rescue me” before engaging in the breathy, poetic spoken-word first and second verses, and the bridge; this style was also used in “Justify My Love” (1990).