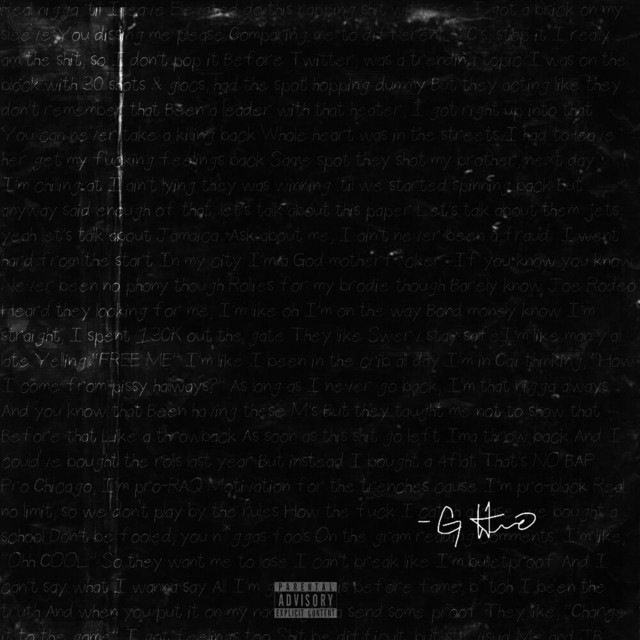 Lyrics for Statement by G Herbo:

Verse
Real nigga 'til I leave (You know that)
Elevated, do this rappin' shit with ease
I got a brick on my sleeve, you dissin' me, please
Comparin' me to different MC's/emcees, stop it
I'm really in the shit so I don't pop it
Before Twitter was trendin' topic (Ayy)
I was on the block with thirty shots and Glocks had the spot hoppin' (Swervo), dummy
But they actin' like they don't remember that (Yeah)
Been a leader with that heater, I got right up into that
You can never take a killin' back
Wholе heart was in the streets, I had to leavе her, get my feelings back
Same spot they shot my brother, next day I'm chillin' at (Ask)
I ain't lyin' they was winning 'til we started spinnin' back (Spinnin' back)
But anyway, said enough of that, let's talk about this paper (Let's talk about it)
Let's talk about them jets, yeah, let's talk about Jamaica (Come on)
Ask about me, I ain't never been a fraud (Never), I went hard from the start (The start)
In my city I'm a god, motherfucker
If you know, you know
Never been no phony though (For real)
Rollies for my brodie though
Barely know Joe rodeo (For real)
Heard they lookin' for me, I'm like, "Oh, I'm on the way"
Bond money, know I'm straight
I spent a 130K at the gate (Yeah)
They like, "Swervo stay safe", I'm like, "Man, y'all late" (Y'all late)
Y'all like, "Free me", I'm like, "I've been in the crib all day"
I'm in Cali thinkin' how I come from pissy hallways
Long as I never go back, I'm that nigga always (Always)
And you know that
Been havin' these M's but they taught me not to show that (For what?)
Before that, like a throwback (Like a throwback)
As soon as the shit go left, I'ma throw back (Brrr)
And I could've bought the Rolls last year but instead, I bought a four-flat
That's no bap (No bap)
Pro Chicago, I'm pro 'Raq (I'm from the 'Raq)
I'm motivation for the trenches 'cause I'm Pro-Black (Pro-Black)
Real No Limit so we don't play by the rules
How the fuck I catch a case? We bought a school (Damn)
Don't be fooled, you niggas fools (Fool ass nigga)
On the 'Gram readin' comments I'm like, "Ooh, cool, so they want me to lose"
I can't break like I'm bulletproof (Teflon)
And I can say what I wanna say, all I'm gon' say is before fame, bitch I been the truth (Ayy)
And when you put it on my name, gotta send some proof (Dumb ass)
They like, "Charge it to the game", I got feelings too (I do)
Shit be difficult (Yeah), but still visual (It is)
Me and JB just been talking 'bout residual (You dig?)
Checkin' on my analytics shit, get digital (Shit, get digital)
Yo, just stay up off my dick, it ain't consensual