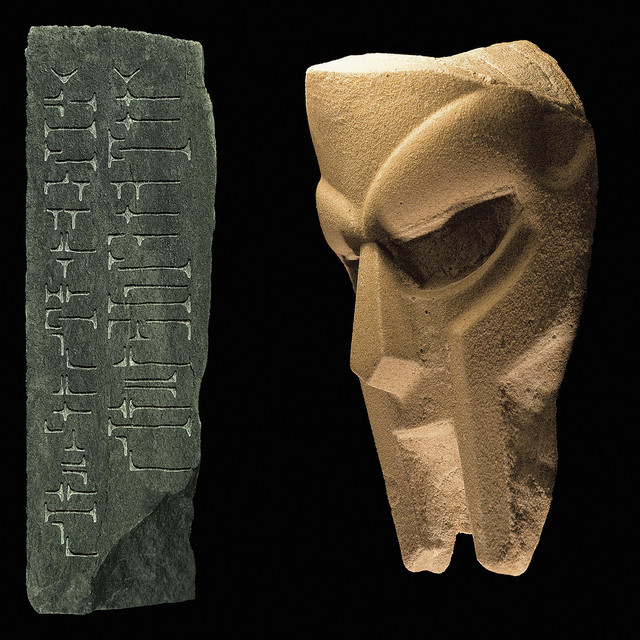 by MF DOOM with: J Dilla

Verse
Villain man never ran with krills in his hand and
Won't stop rockin' til he clocked in a gazillion grand
Tillin' the wasteland sands
Raps on backs of treasure maps, stacks to the ceilin' fan
He rest when he's ashes
Ask 'em after ten miles in his galoshes, smashes stashes
Chip on his shoulder with a slip on holster
A clip, a folder and his grip on a boulder bolster
They supposed to know, it show when his aura glow
Get from out the row, when he get dough, it's horrible
Time is money, spend, waste, save, invest the fess
For 10 K's, he'll cave a chicken chest S
Yes... y'all, the dub will get ya trickles
The best ballers pitch in and rub to get a nickels
But tut tut, he 'bout to change the price again
It go up each time he blow up like hydrogen
Villain here, have 'em shrillin' in fear
And won't stop top illin' 'til he a gazillionaire
Grillin' stare, yeah, ya boy had drama
Got 'em on a mental plane, avoided bad karma
Once sold an inbred skinhead a nigga joke
Plus a brand new chrome smoker with the triggers broke
I thought I told 'em, "Firing pins was separate"
He find out later when he tries to go and rep it
Took a Jehovah money for a Arabic Torah
Charged in advance to translate it and ignored it sorta
One monkey don't stop no slaughter
A junkie wanna cop a quarter ton, run for the border
Know the drill, it ain't worth the overkill
Flow skill, still, there's no thrill
Fill a billion 10K bills in his pill'a
Villa', when it gets realer, split the skrilla with
Dilla (Dilla) mix, mix, mix
Do a deal for kicks and get rich quick
Sketch lyric, bet'cha bottom nick on some vic
Ick from the drumstick come with the dumb shtick
Sick slick, hidden in a book
The only way they find it if you're spittin' in a hook
Listen, don't look now, keep walkin'
Traded three beans for this cow, cheap talkin'
Hawk men stalkin' hear that we hawkin' often
Coughin' to a coffin, might as well scoff the pork then
He's like Worf, some say stronger though
Off the top, Jay Strongbow, play along bro
Wear a mask like yo, off The Gong Show
Flow slow as Mongo, Don Juan thong pro
For ya info when he's not practicin' Jim Crow
A actress and some nympho bimbo
He's playin' Ray J, the old tape
DOOM—well what can I say like JJ in a gold cape
Fill it to the rim like brim
Villain and ya won't find him in no gym
Probably a foggy bog with the frogs
With a dot on the guard as he squat on a log
Half cocked and half baked
Used to keep a full stock of work, half rocked and half shake
My mistake, sign a track agreement
For more G's than lines and cracks in the cement
In any event it's fake like wrestlin'
Get 'em like Jake The Snake on mescalines
Ahem, elixir for the dry throat
Tried to hit the high note, Villain since a itsy bitsy zygote
By remote, send in the meat wagon
Braggin' MC's packed in with they feets draggin'
These stats are staggerin'
Had his Ph.D in indiscreet street hagglin'
Villain—his agenda is clear
Endin' this year with dividends to spare, here
It's not meant for the seein'
Went through the ceilin' after enterin' his center bein'
A new meanin' to sales through the roof
Guaranteed raw and saw his truth was truth, proof
It's the return of the tramp
Who do a duet jam when Ernest goes to camp
For the right earn, kna'mean like Vern
We need some more oil for the machines to burn, learn
Jiminy crickets
He gets lucky like winnin' free tickets off sickly lyrics
One man's waste is another man's soap
Son's fanbase know the brotha man's dope
A real weirdo with a bugged rare flow
And the way his hair grow was ugly as a scarecrow
He wears a mask so the charge won't grab
On a rooftop with a large stone slab
Heads up, talk white and thought niggerish
Refuse to walk tight and got his off the vigorish
Black licorice and equally as yucky
How he handled the money was strictly Dan Stuckie
Monkey hustle, man on fire
Later for the date than the Hadron Collider
And cost more, it be seemin' like a style
DOOM leave the competition steamin' like a pile
Smile, ding! Sparklin' jewels
In effect like alternate side of the street parkin' rules
Fools, the roach was never dead
Live for a week then dehydrate with a severed head
Instead, it was depicted as flicked in
Split, the wicks lit (Can you dig it?)

Outro
We have got to try and find DOOM!
Good luck!

4 minutes of classic unbridled DOOM fire, with a plethora of topics ranging from the LHC to ambiguous T.S. Eliot references, this song kicked off DOOM’s 2009 album Born Like This with no pulled punches.

With a posthumous J Dilla beat sandwiched in between the same JayDee jam, DOOM has ample room to put his lyrical ability on display with this track.