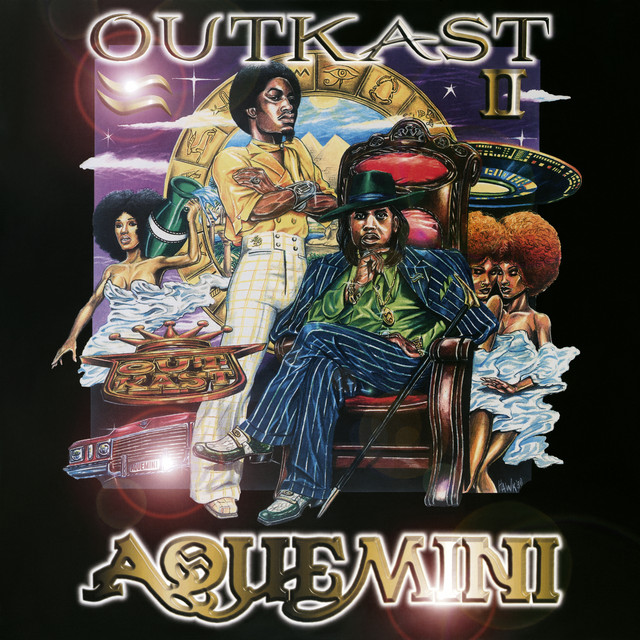 Lyrics for SpottieOttieDopaliscious by OutKast:

Verse 2: André 3000
As the plot thickens
It gives me the dickens, reminiscent of Charles
A lil' discotheque nestled in the ghettos of Niggaville, USA
Via Atlanta, Georgia
A lil' spot where young men and young women go to experience they first little taste of the night life
Me? Well, I've never been there
Well, perhaps, once, but I was so engulfed in the Olde E, I never made it to the door
You speak of hardcore
While the DJ sweatin' out all the problems and troubles of the day
While this fine bow-legged girl fine as all outdoors
Lulls lukewarm lullabies in your left ear
Competing with "Set it Off," in the right
But it all blends perfectly, if you let the liquor tell it
"Hey hey look baby they playin' our song"
And the crowd goes wild as if Holyfield has just won the fight
But in actuality it's only about 3 A.M
And three niggas just don' got hauled
Off in the ambulance, sliced up
Two niggas don' start bustin', "wham! wham!"
And one nigga done took his shirt off, talkin' 'bout
"Now who else wanna fuck with Hollywood Court?"
It's just my interpretation of the situation

Verse 3: Big Boi
Yes, when I first met my SpottieOttieDopalicious Angel
I can remember that damn thing like yesterday
The way she moved reminded me of a Brown Stallion
Horse with skates on, ya know
Smooth like a hot comb on nappy ass hair
I walked up on her and was almost paralyzed
Her neck was smelling sweeter
Than a plate of yams with extra syrup
Eyes beaming like four karats apiece just blindin' a nigga
Felt like I chiefed a whole O of that Presidential
My heart was beating so damn fast
Never knowing this moment would bring another
Life into this world
Funny how shit come together sometimes (ya dig)
One moment you frequent the booty clubs and
The next four years you & somebody's daughter
Raisin' y'all own young'n now that's a beautiful thang
That's if you're on top of your game
And man enough to handle real life situations, that is
Can't gamble feeding baby on that dope money
Might not always be sufficient but the
United Parcel Service & the people at the Post Office
Didn't call you back because you had cloudy piss
So now you back in the trap just that, trapped
Go on and marinate on that for a minute

“SpottieOttieDopaliscious” is a soulful, funky horn-filled jam inspired by Reggae vibes and Good Times. André gave some background on the track:

The song started with a sample I’d chopped up. I was vibing on reggae stuff at the time, listening to a lot of Bob Marley.

Iceberg Slim used to put out albums talking on beats and I was like, “This is cool.” I think I laid down my verse first and Big just came in. But instead of spoken word, Big likes to call it “smokin' word.” That was his smokin' word.

André also revealed that another artist was potentially going to be on this song:

We were riding in the car and Erykah [Badu] was originally supposed to be on “SpottieOttie” and somehow it ended up working out where she fit better on [“LIberation”]. So she went off and wrote her thing and ended up coming back with something cool.